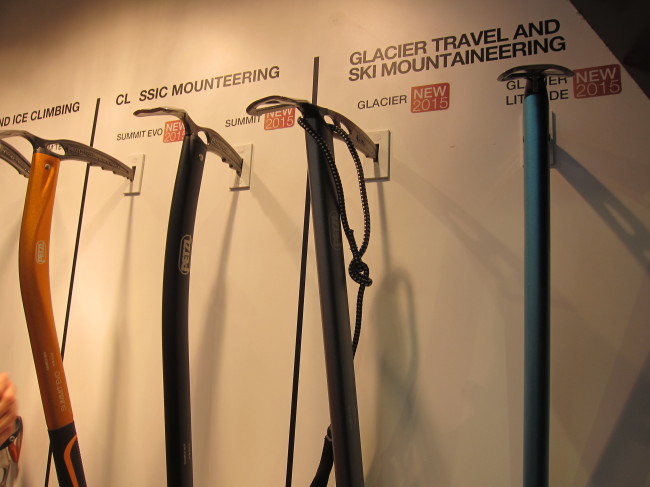 For 2015, Petzl adds a couple new lines of ice axes to their collection. Meant for ski mountaineering, basic glacier travel, and intermediate climbing on varied terrain (classic mountaineering), the new ice axes round out the otherwise highly technical lineup for Petzl.

George Mallory made a couple of attempts on Everest (1921, 1922) before that fateful day in 1924 when he disappeared along with Sandy Irvine. On display at the National Mountaineering Exhibition in Rheged until 2004, the ice axe Mallory used during the 1922 expedition is now up for auction at Christie's. Expected to fetch a price of between $11,000-$13,000, this amazing piece of mountaineering history will go to the highest bidder on April 10th.

Materials science and engineering student Isaiah Paul Janzen recently filed a patent application for an ice axe with a detachable head and I-beam shaped handle. For use in mountaineering situations, this ice axe design will supposedly improve its performance as an anchor as well as offer you more versatility on the mountain.

Italian company Climbing Technology has developed a new belay device called the Click Up. Lightweight and simple to use, the auto-locking belay device employs an HMS carabiner to do the hard work. Very little effort is required to give or take in slack and lock off if your climber should fall.